I am seeing a troubling trend for Independence Day this year. Some people are actually complaining about the public ads and posts that thank veterans and honor the military on the 4th of July. Now, I am well aware that the 4th of July is neither Veteran’s Day nor Memorial Day, and I don’t think anyone in the military is asking for it to be treated that way. 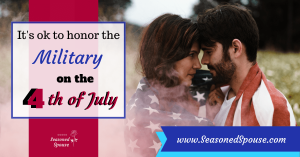 Are there already “too many military holidays” on the national calendar? No. I think not. Honestly, I think we could honor those in military service every single month, and it still wouldn’t equal or repay the services they have done for their country. But that’s not the point. The point is that it is completely appropriate and acceptable to honor the American military on July 4th. And here’s why.

Read more about Lizann at SeasonedSpouse.com

As Family Private Care continues to monitor the developing situation with COVID-19, we are adhering to all CDC and WHO guidelines for healthcare professionals. We ask all our clients to have a ready supply of gloves, anti-bacterial hand soap, and sanitizing wipes and sprays. Additionally, we are encouraging our caregivers to have these items with them as well. We would also recommend that all clients & caregivers closely monitor the CDC guidelines, practice social distancing, avoid all travel, and avoid groups over 50 people. Should a client or caregiver exhibit any flu-like symptoms, please contact our office at 678.620.3064 immediately! Thank you for your continued trust in us. Working together, we will all get through this.

Staying Safe During A Hot Summer