Recently, I had the privilege to attend a conference on Workers Compensation in downtown Atlanta. Family Private Care had a booth set up in the vendor hall which I staffed for several hours for two days. As I was there meeting lots of great people, I could not help but notice this interesting man walking by several times daily. He had a unique apparatus attached to his back and legs. He also used walking sticks to assist him in ambulating.

After watching him for a while my curiosity got the best of me and I just had to find out what his story was and the equipment he was using. I followed him to the booth where he stopped and sat down. The booth’s heading said “Rewalk.” I asked him to explain the technology to me, and he told me that Rewalk is a computerized exoskeleton powered by a battery pack. There are motors at the hip and knee joints, plates in the shoes and a watch that controls it. He explained that the motors send stimuli to the proper nerves to produce walking. I couldn’t help but think “Isn’t this awesome!?”

The gentleman who was wearing Rewalk shared with me that he was in an accident and paralyzed from the waist down. When he first obtained his Rewalk he had been in a wheelchair for 20 years. When I asked him what the most difficult part was to adjust to with Rewalk, he immediately said “standing up.” He had not stood for 20 years!

My eyes were full of tears just thinking about how life changing this wonderful invention is for so many people! How encouraging for those who need it! I also learned that this equipment has been approved by the Veterans Administration for veterans who are qualified candidates! I was humbled to have spoken with him and to have learned more about this amazing technology. Interested individuals can visit www.rewalk.com to learn more about the equipment. 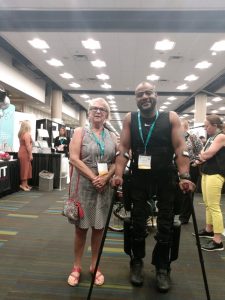 How to Protect Your Senior Loved One from Financial Scams